Although there are several theories as to the origin of our name, the most popular one is;

Lac du Bonnet is a community rich in history dating back to the de La Verendrye era (circa 1732). Pierre Gaultier La Verendrye, having surveyed the topography of the area, decided that the lake (actually a river) reminded him of a bonnet. Appropriately, he named the area Lac du Bonnet. 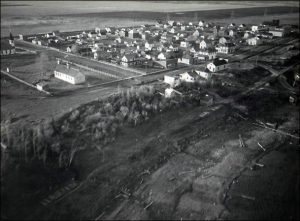 The Winnipeg River and its tributaries were used by the Indigenous peoples long before European contact, with encampments located in various locations along its banks. With the fur trade monopoly, the two rival trading companies, North West and Hudson’s Bay, paddled their canoe brigades along the Winnipeg River on their journey to the untamed lands of the West.

A voyageur by the name of Joseph Derouen travelled through the Winnipeg River area around 1760, listing the names Lac du Bonnet and Portage du Bonnet in his itinerary of the trip. Cartographer, Aaron Arrowsmith, became the first to use “Bonnet Lake” on his 1791 map.